One of the wearable tech people Kate has met since her move to New York is Daren Guler at Invent-abling. Invent-abling focuses on kits for education to learn more about how technology works. They create their own sewable LEDs, buzzers and sensors with sewable parts.

END_OF_DOCUMENT_TOKEN_TO_BE_REPLACED

Today I started working on using fabric in conjunction with a servo motor and arduino uno to create interesting actuation that may be placed on the body. I am totally inspired by Meg Grant and her experiments in this area. This is something I am hoping will inform hack #2 of our research, bringing the outside to the inside and embodying sensations. I started with five different types of fabric to see how they would move and possibly feel went set in motion by a servo. I used silk chiffon, silk charmeuse, lycra, wool blend and denim and cut them into 12 inch squares. To attach them to the servo I used no stretch nylon bead string to two corners of the squares. The last two were very hard to use and one string broke each time I tried to move them with the servo. The first three fabrics however were light, flexible and moved constantly in swirling motions one way and then the other.    The silk charmeuse was interesting because it was not quite as floppy as the chiffon. I decided to continue to work with this and added two more strings. The dance that resulted reminded me of so many things: waves in the ocean, puppets being manipulated, and definitely choreography. The other exciting observation was when I put my hand on the fabric and could feel the movement. There was definite pulling and releasing from various angles that could be sensed by the body. This is very promising as a start to Hack Two.

For the Unraveled performance, I have been working with conductive yarn. What I have found is to make sensors with a resistance that is measurable. I don’t focus on the electronics and measurements so much – just what seems to work. A lot of this is based on Kobakant’s How To Get What You Want. So I highly recommend checking them out, especially if you want conductive and resistant measurements.

Basically I crochet a sample of yarn with the conductive yarn and normal yarn just paired together as if I were crocheting with one piece. The conductive yarn is Nm10/3 conductive yarn. The stitch I default to is a double treble (UK) crochet stitch. I actually taught myself crochet through these tutorials. 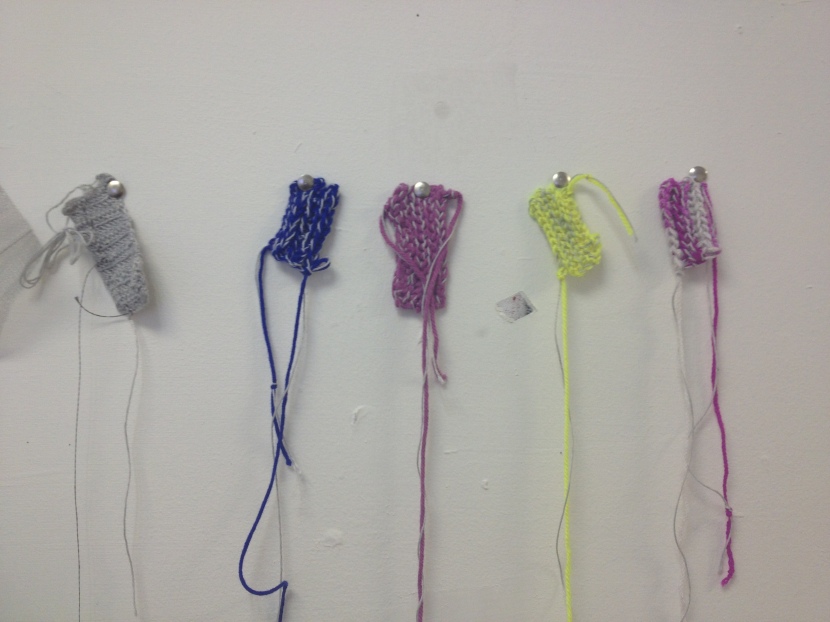 I have been trialling different types of normal yarn and have found some just are not resistive. My test is a simple 3.7V battery , resistor and LED and when the yarn is stretched. In the image above you can see the types of yarn I have tried.

I have used the working trials in creating soft circuits with the crocheted stretch sensor, battery and LED with conductive thread. Below the crochet is sewn onto stretch jersey fabric so the stretch comes from the fabric.

Recently I have been working on a dance piece called Unraveled which utilises crocheted stretch sensors across the ribs to measure breath. This is then sent via a microcontroller wirelessly to a laptop where it manipulates sounds. During this process there have been many technicalities in working with bluetooth (Bluesmirf in particular) and Flora which have made me change directions in the parts/technology which will be implemented this project.

First idea was to use the Flora microcontroller from Adafruit. This is a newer microcontroller that is for wearables with slight differences from the Lilypad (mostly around the battery). Adafruit plan to release a bluetooth module according to their website. This being the case I thought the Flora might work with other bluetooth modules, such as Bluesmirf. Unfortunately this is not the case.

Firstly, I had to reconfiguire the Bluesmirf anyways. There is more about how to do this here and here. There is also a small bit about this in Tom Igoe’s book Making Things Talk (2nd edition) on page 68. Basically it has to be changed from HID to SPP in order to pair with a laptop and send serial. I did this first in Cool Terminal and later realised I could also do this in the Arduino software. However, even after trialling various CMD codes, it would still not handshake with the Flora.

It is definitely not the Bluesmirf because the set up works with the Arduino Uno. And I can send serial from my stretch sensors to the computer wirelessly. The problem with the Uno is that is is a bulky board for prototyping, not really to be worn as part of a costume. 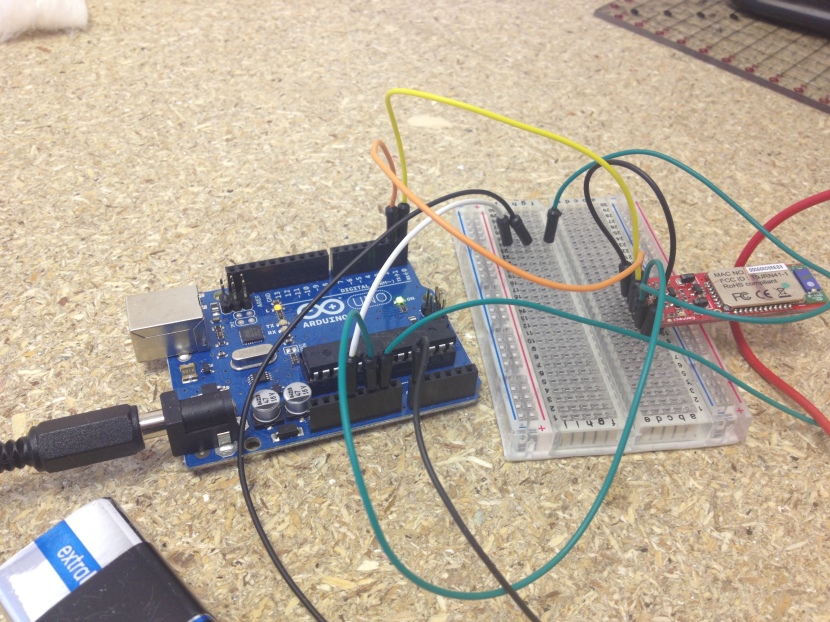 My next idea is to move away from bluetooth and use xbee and lilypad. This is a working combo and will allow for sewing the lilypad onto the garment that is also housing the stretch sensors.